Image may look different due setting on your computer screen!

Gorgeous silk velvet fabric is a first quality velvet. The fabric is extremely soft and has a plushy texture to it. The rich texture of this fabric makes it suitable for high fashion garments and upholstery projects.

I was hoping for a berry pink, but still in a historical tone. To me this leans more toward a dried blood color rather than a berry pink. Real dried blood would be a dark red almost brown, and this is not that, but it leans that way, as I said. My initial thought was to return it, but then I draped it over my arm and looked in the mirror and it did complement my skin tone. So it’s just more of a fall color maybe rather than a summer color. It is also lighter weight than other silk velvets I’ve handled. So, I’ll keep it, I do like it, but it’s not what I was hoping for. The shipping was very quick, though.

C
Crispina Bednar
I've been buying this silk for years. It's...

I've been buying this silk for years. It's gotten more expensive and still work the price. Quick shipping and Consistent excellent quality. 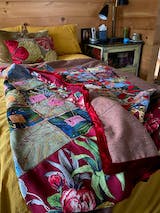 LOOKING TO OBTAIN A SWATCH?

Please email us for a swatch inquiry and we will be more than happy to assist.

We typically take 1-3 buiness days to process orders plus the transit time. For our return policy, please click here.